skip to main | skip to sidebar

There's a sort of a boxing match going on now whether Mike Tyson's tattooist has a legal interest in the tattoo on the face of Ed Helms in the Warner Brothers movie, "The Hangover, Part II". The lawyers for S. Victor Whitmill, the tattooist, will disagree with me, but my answer is no.

Copyright protects "original works of authorship [that] can be perceived, reproduced, or otherwise communicated". (17 U.S.C. §102 (abridged)). Like most ideas, many works of art are not wholly original as there is some background in a previous work. Many people, including S. Victor Whitmill, call this inspiration. As a hard rule, requiring complete originality would disallow copyright because inspiration would negate originality to the whole of the work. Fortunately, the U.S. Supreme Court opened originality to "a two-fold requirement of independent creation and some minimal degree of creativity." (Feist.)

Which brings us to whether S. Victor Whitmill has a copyright. He admitted his work was not independent creation. The crux of Whitmill's success will be in showing his work is creatively different, and not just different than the Maori tattoos that inspired him. That's because there is more to creativity than inspiration. The Warner Brothers lawyers will attempt to show that the Tyson tattoo is a combination of Maori tattoos, other tattoos, and even other art as well. This type of debate is common in copyright disputes to disallow the claimed creativity by showing that the parts that are independent from a major inspiration are common elements in the theme of the work, in essence, copied from elsewhere in the field of the art.

For example, movies often contain common elements, guns in westerns, jumps in car chases, etc. Even tattoos contain common elements. Many tattoos are a kind of 'warrior' brand of art by including knives, other weapons, pseudo-weapons, slogans, etc. The Warner Brothers lawyers will likely parade people and photos to the judge's discontent to show the Tyson tattoo is merely a combination of tattoos and weapons.

This anti-copyright argument has its basis in that we as a society do not want someone to use a variation on a theme to lock up copyright protection to the theme. In other words, Maori tattoos have been in existence for a long time, there are many books on Maori tattoos, and tattoo artists study tattoos just as any artist studies works of their peers and predecessors. As a society, we do not want art to lock up a marginally creative idea that prevents its enjoyment by everyone. 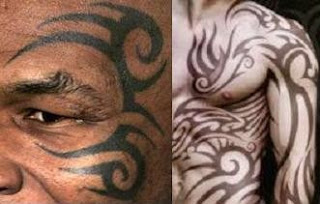 Looking at the Tyson tattoo, in fact, reveals the elements of knife-like tips, curves, and double and triple parallel lines that are thematic to Maori tattoos. The three-piece knuckle slasher, meanwhile, is akin to that of Wolverine, i.e., a weapon. As they say in law, in the totality of circumstances, the creativity of the Tyson tattoo is thin, so thin in fact, that Warner Brothers is free to copy it.

If you are or know a tattoo artist, do not be discouraged. Tattoos are art, and copyright will protect sufficiently creative art. Before you ponder on, though, consider copyright registration for your tattoo art, the filing fee is only $35. The Copyright Office rarely denies registration and registration is proof of both your creation of the art and the date of creation. Besides being inexpensive, registration is a requirement before you can sue for copyright infringement.
Posted by Gerald R. Prettyman, Esq. at 10:33 AM 1 comment:

Gerald R. Prettyman, Esq.
Pleasanton, California, United States
"Protection for All Your Ideas Under the Sun."®
Gerald R. Prettyman is an Intellectual Property, Internet and Patent Attorney. Mr. Prettyman holds a Juris Doctor and earned a Master in Laws in Intellectual Property. Mr. Prettyman was previously an engineer in the fields of medical devices, materials science, nuclear energy and propulsion, electronics, and consumer products.
This blawg may contain legal commentary. It does not constitute legal advice to any individual. It does not create an attorney-client relationship or any other expectation of confidentiality, nor is it an offer of representation.
© 2009-2011 Gerald R. Prettyman. All rights reserved except where otherwise protected or declared as public domain by, e.g., a Creative Commons License. Distribution permitted with attribution.