skip to main | skip to sidebar

Should product features of touch, smell or taste be eligible for trademark?

Duets Blog asked about the use of texture as a trademark.

I'm in favor of registering anything (compatible with public policy) that can put the public on reasonable notice that the thing is used a trademark. By reasonable notice, I mean there is consistent reproducibility in the product or service and adequacy of the description in the registration.

As a former manufacturing engineer, I am familiar with the problems of reproducible manufacturability and in reliable measurement (description). Fortunately, technology has reduced both to essentially 'no problem' for many fields of manufacture.

As such, the question of reasonable notice now shifts to adequacy of the description for public notice. While an embossed sample apparently sufficed for OLD PARR (Ecuador?), current electronic searches (via TESS, the Internet, etc.) require a textual description with a reasonable pictorial facsimile for non-word visual marks. This is not to prohibit embossed masters for registration, but the public needs reasonable notice without having to seek and buy every competitive product in the field. Some tactile marks could meet the textual description with a reasonable pictorial facsimile criterion. More complicated tactile marks might require dimensional (surface finish) descriptions, the measurement of which is now standardized and is therefore adequate for putting the public on notice. Holography would also be a good descriptive viewer with proper technology (but not on my monitor as yet).
Moving on to scent, non-functional single description scents have had minor success for registration as a trademark, but a description as a mix of scents failed (http://www.caslon.com.au/trademarkprofile11.htm). From an engineering and forensic point of view, a description based on gas-liquid chromatography results would likely have reproducibility, adequacy of the description, and be electronically searchable. Multiple blends of scents might be registered if the GLC description truly described the scent as reproduced with pure chemicals. Even if there were some difficulty to electronic searches, the difficulty would likely not be more than patent lawyers (like me) currently work with for prior art searches (and yes, it leaves a lot to be desired).

This leaves the fifth sense, taste, but taste analysis sufficient for reproducible manufacturing is still a skilled talent outside of an engineered metric. As evident by the description of fruit flavor and oak tone in wine, taste relies considerably on smell. The wide range of genetic ability to taste various compounds combined with age and culture related considerations makes an adequate description likely impossible at any stage of technology. 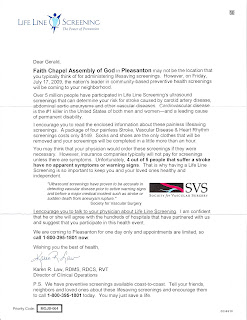 Thank you for your letter of invitation for LifeLine Screening in Pleasanton on July 17th. Two of your statements are quite interesting.

"Unfortunately, 4 out of 5 people that suffer a stroke have no apparent symptoms or warning signs."

"Ultrasound screenings have proven to be accurate in detecting vascular disease prior to active warning signs and before a major medical incident such as stoke or sudden death from aneurysm rupture."

Your first statement is, "unfortunately," unsubstantiated, and as shown below, appears to be an outright lie, while your second statement takes out of context the position of the Society for Vascular Surgery.

Your letter lacks a reference for the first statement, and I have not found a reference to authenticate it. None of the information I found from by American Heart Association (1), the National Stroke Association (2) or the Society for Vascular Surgery (3) support your statement. The AHA, NSA and SVS information, in fact, regarding silent cerebral infarction strongly suggests your statement is untrue.

There are some related facts that I found. "Four out of five American families will be touched by stroke at some time." (4) "About four out of five people who die of coronary heart disease are 65 or older."(5) "Up to 80% of strokes are preventable."(6) These related facts, even taken together and with inferences, however, do not support that your statement is true.

Every reference I found containing your "4 out of 5" statement was an advertisement for your services. These include the Larry King Cardiac Foundation, the American Senior Benefits Association, and other organizations, such as a letter like yours that I received in April from the American Society for Mechanical Engineers. Based on the lack of authentication, I conclude that your statement is fabricated.

The closest independent supporting statement I found was from a doctor who stated that Peggy Fleming said in 2004, "50% of all strokes occur in people who show no symptoms." (7) I am unaware of where or how Ms. Fleming gained her expertise to make that statement. If true, I suspect the rise from 50% to 80% (4 of 5) of asymptomatic stroke in five years would undoubtedly raise alarm and be in the publications of the American Heart Association and the National Stroke Association. While proving a negative is generally not possible, the absence of support for a statement is accepted as disproving the statement, particularly when, as here, other facts fail to support the statement. At best, is the statement of SVS that "[v]ascular disease is … generally asymptomatic until a catastrophic event occurs." As an educated person, you are aware that "generally" is meaningless. Based on the lack of authentication, I conclude that your statement is fabricated.

Your second statement, attributed to the Society for Vascular Surgery, omitted the sentence before ihttp://www.blogger.com/img/blank.gift. If you are not aware of the sentence, here it is:

Taken in proper context, the paragraph clearly limits the benefits of "preventive screening for vascular disease" to "individuals 55 years of age or older WITH cardiovascular risk factors." Your letter omits this important fact. Thus, your statement plainly takes the Society for Vascular Surgery position out of context. For that reason, I am copying them this letter and your letter.

Furthermore, the accompanying tiny leaflet magnifies the distortion under the question of "Who needs to be screened?" As with many 3-point marketing misrepresentations, (9) the answer of "anyone over 50 who wants to be proactive about his or her health" misconstrues the NSA fact following it. Neither these statements nor those in the letter substantiate the conclusion that people with risk factors "may wish to be screened, even if you are in your 40s." This conclusion, in fact, clearly misrepresents the SVS position above suggesting screening of people with risk factors over the age of 55. While 55 may be the new 40, being 40 with risk factors for stroke does not equate to being 55 with such risk factors. For this misrepresentation, I am copying this letter and your letter to SVS.

I also found other inconsistencies. Your letter says, "LifeLine Screening is … important to keep you and your loved ones healthy and independent." As a Registered Diagnostic Medical Sonographer, Registered Diagnostic Cardiac Sonographer, and Registered Vascular Technologist, you know that screening does not "keep [a person] healthy and independent." Those come with a beneficial diet, exercising, negating risk factors, and treatment. Your use of your credentials to appear to authenticate these lies is a discredit to the medical profession (I was formerly a medical technician). For that reason, I am copying to ARDMS this letter and your letter.

Wishing you the best of health,

Gerald R. Prettyman, Esq.
Pleasanton, California, United States
"Protection for All Your Ideas Under the Sun."®
Gerald R. Prettyman is an Intellectual Property, Internet and Patent Attorney. Mr. Prettyman holds a Juris Doctor and earned a Master in Laws in Intellectual Property. Mr. Prettyman was previously an engineer in the fields of medical devices, materials science, nuclear energy and propulsion, electronics, and consumer products.
This blawg may contain legal commentary. It does not constitute legal advice to any individual. It does not create an attorney-client relationship or any other expectation of confidentiality, nor is it an offer of representation.
© 2009-2011 Gerald R. Prettyman. All rights reserved except where otherwise protected or declared as public domain by, e.g., a Creative Commons License. Distribution permitted with attribution.